This camera was mainly used by the RAF for air reconnaissance at WW II.
On the pictures you will see a "Hand-held" version with a "Gun-Like Trigger" (gray one).
And a build-in version (black one). The body's were all the same. They just have to attach a "Hand Mounting" and a frame sight (corresponding the lens). Changing the Gear Box made it possible to use the camera with the Gun-like Trigger.
The build-in version was used fixed in a Spitfire, Lysander, Avro Lancaster etc.
You can find more specific information about the usage in the spitfire here: http://www.historyofwar.org/articles/weapons_spitfire_PR.html 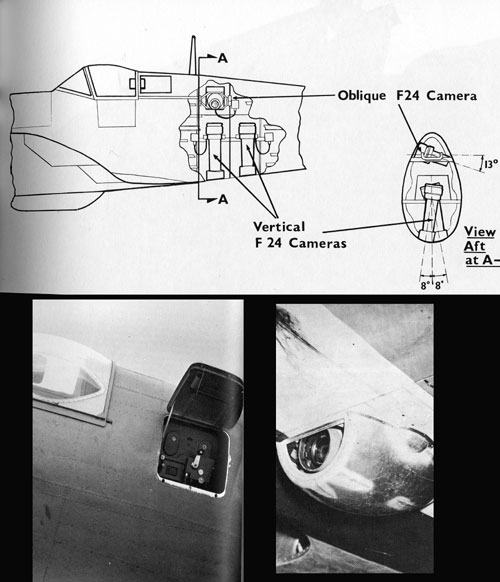 While the hand-held version (according some people I spoke) was present in nearly every bomber, ready to use when the crew saw some enemy buildings, structures or army movements. Or to take a picture of a bombing site.

The "Hand Mounting" was transported (if not in use) in a separate chest with sliding mechanism. There was also space for some frame sights and a spare magazine.

Nice to know: every part has his separate serial number, object number and the "A.M." mark with the crown (Air Ministry)


Of these particular cameras, the mechanic, housing and lenses are in a superb state!
To bad the (plastic) curtain of the grey one is broken due to age.
If somebody had a spare, please contact me!
Also if you know more about the lens on the grey one, indicating Ross. London (and that's it), contact me please!